Personally, I still don’t know if I like it. I’m not even sure I want to watch it again

For me, this is the most personally divisive film of the year. There has not been a picture which has won me over and subsequently lost me so many times. There were moments I despised, slating them as they appeared before me. There were moments that mesmerised me, becoming genuinely affecting and mind-numbing. There isn’t another film like A Ghost Story and I still don’t know if that’s a good thing.

C (Casey Affleck) and M (Rooney Mara) are a quiet natured couple living in a detached suburban house, bereft of drama. However, after a short time, C is caught in a motor crash outside their home, killing him in the process. After being left cloaked in a white sheet at the morgue, his body reanimates, and he returns home still covered from head to toe.

One of the most irritating things about A Ghost Story is its fuelling of ridiculous notions from all hipster-inclined critics. Wendy Ide of The Guardian suggests:

Affleck imbues what could be an absurd presence, loitering on the edge of the frame like a piece of misplaced laundry, with an agonising sense of loss and mounting frustration. In his economic movements we recognise a soul adrift and increasingly unmoored from everything except his grief. 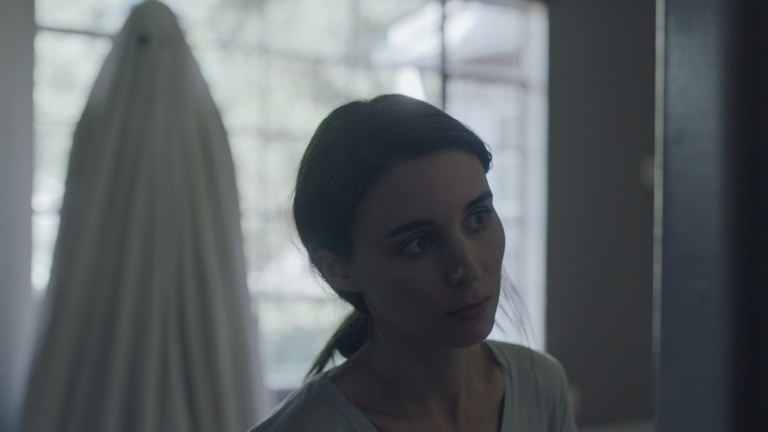 Without wanting to spoil the film, Affleck often does not move in these scenes. Literally standing there, but Ide finds him “with an agonising sense of loss and mounting frustration” there is, in fact, nothing of the sort. It could be anyone under that sheet and this is what director Lowery wanted to convey. When things have passed on, the attitude towards them changes, not that a practically non-sentient object has an agonising sense of loss. Finding things that aren’t there is the same to a critic as finding gold is to a prospector.

A Ghost Story is too independent for its own good, cripplingly so in some places. It is impossible to not lose interest. When a shot does not move for minute after minute there is no way of keeping attention focused for the full period. It absolutely makes the audience think, but almost never what it wants to be considered. It’s a film that needs things done its own way to work in its entirety, and that’s a near impossible ideal.

However, the soundtrack that Lowery has pieced together is mind-bendingly incredible. The use of individual, appropriate music is beautifully sanctioned an edited astoundingly well. With Dark Rooms’ I Get Overwhelmed leading the way, the soundtrack makes for a touching listen and its connection to the story makes it even more fitting.

This is the thing about A Ghost Story. For some moments it is ground breaking, others it is as if the ground falls away from under the chair, in the worst way possible. This is the most unique film of the year and nothing will top it in that department. Personally, I still don’t know if I like it. I’m not even sure I want to watch it again.