The majority of the praise received by Roman J. Israel, Esq. was solely focused upon leading man Denzel Washington. His performance is, at times, brilliant, and often fills all of the space the film had available to grow into. Yet it shouldn’t be forgotten that there is a film behind Washington and one with interesting ideas and a fresh story to add on top.

Working as the back room lawyer in a two-man law firm, Roman (Denzel Washington) is thrust into the limelight when his partner is taken seriously ill and hospitalised. Unable to hold his tongue in court, Roman cannot keep the company running by himself, and help arrives in the form of George Pierce (Colin Farrell). Tasked with slowly closing the firm down, George’s arrival puts Roman in a difficult position. Feeling trapped in a world of uncertainty, he looks for a new way to live his routine-heavy life.

The film’s simplicity, compared with Israel’s personality complexity, gives it a depth pictures often strive to achieve. By working in this form of tandem, the two parties allow each other to fulfill a large portion of their potential. Because Washington is so overbearing and present in his role, the film could never match that as a whole, and, perhaps coincidentally, the quieter more subtle approach from director Gilroy really works. 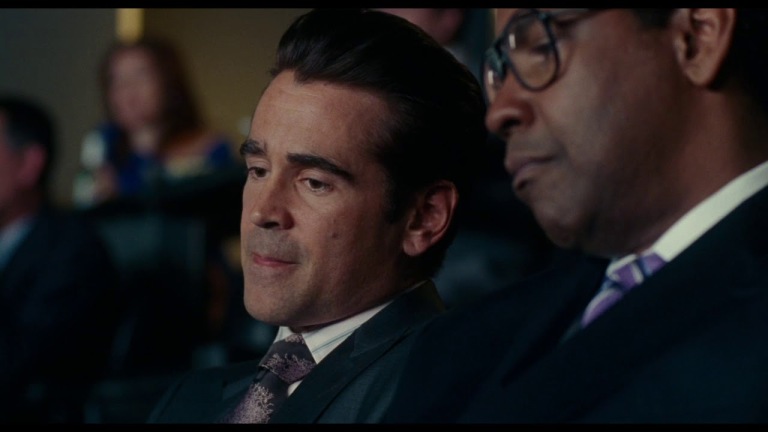 Washington himself is starkly individual in his performance. Even separate from his own previous performances, in a very obvious way. After all, it was only one year ago when Washington was praised for his role as Troy Maxson in Fences, a character that only draws similarities to Israel when their agitation and anger rears its head. Which, incidentally, is the only criticism there can be of his most recent performance. When Israel gets angry, he turns into Denzel Washington, but his introversion and social discomfort make him a fascinating and engrossing watch.

The majority of Roman J. Israel Esq’s worth comes from its character development and its understanding of how to present Israel on the screen. The film borders on becoming a biopic of a reserved lawyer at base level, but in reality, it is so much more as it explores his interactions with others on almost every level possible.