There’s far too much reliance on Redgrave and Spall to make Mrs Lowry & Son a piece for the ages, rather than an engaging and personable watch

To create a truly great character study, a feature needs to expose its personality, or personalities, to situation changing events that becomes the very basis of the insight being evaluated. Mrs Lowry & Son has two of these, and makes it very evident from the start that it will intricately analyse the pair, and what their relationship means to each of them. But Mrs Lowry & Son forgets that to show who someone truly is, it needs to show how they react to the world around them. L. S. Lowry’s paintings already show that with real industrial grit, and any feature around that, needed to create the world he lived in, not put a stage play onto the big screen.

S. Lowry (Timothy Spall) lives a reserved life in Salford, caring for his elderly mother Elizabeth (Vanessa Redgrave) whenever he is not working. Driven by his love of painting and the area he lives in, Lowry tries to combine the two as often as he can, much to the distaste of his mother. 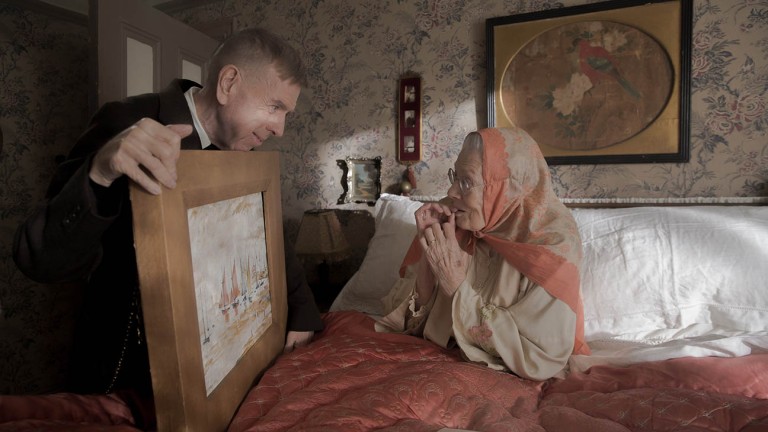 Mrs. Lowry & Son essentially becomes a balancing act of the two performances, with very little else occupying the screen time, as well as Spall and Redgrave seeming no where near their best. The environment they live in may well be accurate, but it is unforgiving and painfully drab. The vision Lowry had for his surroundings is nowhere to be seen, almost exactly what made him so genius, failing to be explored through the film.

The script does the job of moving the characters to their final resting point, but little else, and this seems to highlight that in reality, there was no film there in the first place; like trying to stretch a seal over a container three sizes too big. There’s far too much reliance on Redgrave and Spall to make Mrs Lowry & Son a piece for the ages, rather than an engaging and personable watch.

It isn’t void of vision, but it is void of the tools it needed to execute its plan, leaving the story incredibly exposed, and L.S. Lowry’s life is worth more than what the film manages to show. His artwork speaks for itself, Mrs. Lowry & Son does not do the same.